2017 Bank of the Year Award Winners Recognized at AMBA Workshop

The 2017 Bank of the Year Award winners were recognized by financial management leadership from each branch of service at the Annual AMBA Fall Workshop Luncheon on Tuesday, August 21, 2018 at the Willard Hotel in Washington D.C.

These Bank of the Year Award Winners have gone above and beyond to serve their customers, the military community, and the command and leadership at each of their installation locations.

AMBA extends our sincerest congratulations to the following winners: 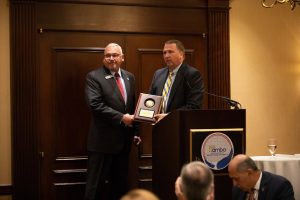 “FSNB provides outstanding financial products and services to support the mission of the Recruit Training. Let me highlight just a few examples of these products and services that FSNB provided in 2017. FSNB opened ~500 “Smart Savers” accounts that earn a 3% APY, with automatic transfers from the members checking account to savings account which encourages making savings automatic. FSNB conducted biweekly briefings emphasizing proven ways to establish a positive credit history, ways to avoid predatory lenders, and individual counseling services. In addition, FSNB provided recruits with a special bill paying service that allow the recruit uninterrupted training time as well as a special overdraft plan that does not incur any additional fees providing the Marine with a “Fresh Start”. FSNB prides themselves on educating and supporting young service members and their families to get them on a sound financial path for retirement under the BRS. The bank provided Treasury General Account services to the food service, commissary, and military finance office at no cost to the government. FSNB also supported numerous base and community events and is a member of the Military Spouse Employment Program.”

From the remarks of COL Karen Hanson, Chief of Staff, US Army Financial Management

“This year’s recipient operates two branch locations on the installation along with 27 ATMs each placed in locations the Command requested, making full-service banking options available to the military community. Their exemplary service extends well beyond ATMs and business hours, it includes financial education, tireless fundraising, and sponsorship of local spouse clubs, and Morale Welfare and Recreation (MWR) programs.

– As a dedicated member of the installation it serves, the bank donated 40 thousand dollars, and thousands of employee volunteer hours, in support of the garrison commander’s sponsored programs. This bank is a corporate sponsor for the Association of the United States Army (AUSA) local chapter; it donates annually to the Family Member Scholarship Fund for dependents of Active duty and retired Service Members, and it sponsored the Gold Star Mother’s Day Event recognizing mothers of fallen Service Members.

– In support of Military Saves Week, the bank offered 30 dollars-worth of free incentives to every Service Member who took the Military Saves pledge, opened a savings account, and made a qualifying deposit – all in an effort to improve individual savings behaviors.

– And, in support of the command, the bank cashes relief checks for Service Members, regardless of customer status, at no cost. In addition, they support unit missions by cashing Treasury checks at no charge, absorbing the cost for special currency shipments. The bank attended monthly newcomer’s briefs as well as monthly town hall and community update meetings, keeping open lines of communication with commands.

– Additionally, 100 percent of the bank’s employees have a military affiliation, specifically spouses and dependents of our Service Members. They are committed to fulfilling their critical role as a Founding Partner in the Military Spouse Employment Partnership.” 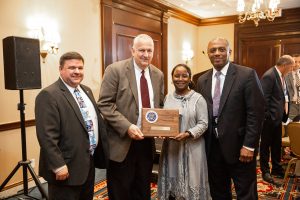 “Established in 2001, this branch provides extensive support to the airlift and special forces missions of multiple agencies. In particular, Armed Forces Bank works with the United States Special Operations and Central Commands’ foreign military personnel on their first exposure to the U.S. banking system. This branch provided exception support to the 6th Comptroller Squadron with emergency funding in their Hurricane Irma evacuation and relief efforts. Armed Forces Banks was fully engaged with the 2017 Military Saves campaign through its partnership with AAFES in public address system announcements to the exchange’s 7,300 customers that week. Additionally, through $30 and $10 account sign-ups, Armed Forces Bank saw over 1,500 interactions and over 250 pledges. The bank’s personal financial management education efforts extended to 350 personnel through its monthly newcomer briefings.”