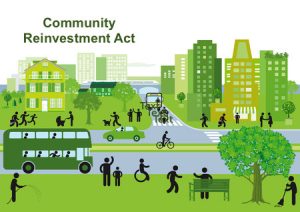 Recently, AMBA was invited to provide comments to the Treasury Department as part of its review of the government’s Community Reinvestment Act (CRA) regulations.  With the help of several of our member banks, Andia Dinesen and I participated in a conversation with Treasury officials and produced written comments.  Our thoughts focused on how the CRA regulations might be modified to better account for the tremendous work each of our military banks performs in the military and veteran communities they serve.

Congress enacted the CRA in 1977 to encourage commercial banks to meet the credit needs of the low-to-moderate (LMI) populations within their geographic communities.  The regulations implementing this law have been revised periodically to account for the changes in those credit needs and the way financial services are delivered.  An exception to the requirement that banks must be evaluated based on their performance within geographically-defined “assessment areas” exists for banks “predominantly” serving military personnel and their dependents.  The challenge for many military banks has been that this exception has not been uniformly interpreted or applied.  In some cases, federal regulators interpret the CRA regulations in such a way as to create disincentives for banks to remain on military installations.  AMBA’s comments encouraged Treasury not only to remove those obstacles but also to revise the regulations to incentivize banks to support military and veteran communities.
You can read our comments here. 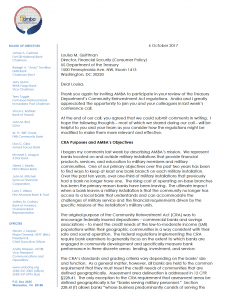