Whether in service of country or team members: ‘I am making a difference, and that is what I enjoy most’ 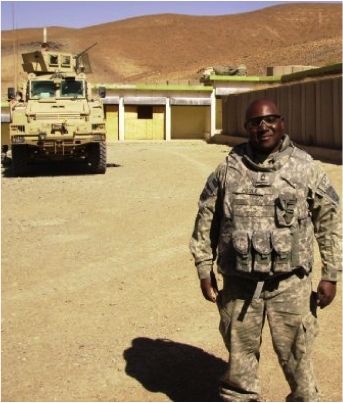 Editor’s note: Consistent feedback from team members suggests you value many different aspects of working at Wells Fargo. Human Resources is exploring some of these in a series of interviews.

What is your experience as a veteran?

“I joined the military right after high school. I graduated on a Friday and was on the bus to basic training that Sunday. I spent 21 and a half years in the U.S. Army, specializing in the avoidance, detection and decontamination of personnel from large-scale chemical, biological, radiological or nuclear weaponry. I managed anywhere from one to 1,800 people, averaging a team of about 150 soldiers at any given time. I saw combat in Afghanistan and Iraq and served overseas in Germany, South Korea and Hawaii. I was stationed at five different U.S. bases, as well. It was a challenging journey, which included two bronze stars from my time in combat zones. Amazingly, I also happened to complete my bachelor’s degree while deployed in combat. How did I do that? Throughout my life, I have often been able to focus during stressful situations and still perform at high levels for my country, my team and myself.”

How did your journey bring you to Wells Fargo?

“In the Army, I learned that the definition of good leadership, as well as that of a strong team, is really the same anywhere. Traits like honor, integrity and loyalty are universal. During my Army career, I was in charge of operations management, logistics, HR and many other areas closely related to corporate work. I have always valued education, and the Army paid for my associate’s and bachelor’s degrees, as well as my master’s degree in psychology and graduate certificate in human resources management. I also took advantage of every course and training program the Army offered, knowing they would be helpful in my later transition to civilian life. After retiring from the Army, I looked closely at myself and all my experiences and knew I could apply them in corporate management America if I could position them correctly. As I looked for jobs, I noticed Wells Fargo had many available ― a good number of them not in actual banking. That’s how I came to apply here and join the company almost a year and a half ago.”

What do you like most about your current role?

“I oversee all FMLA*, personal, administrative and military leaves. The common thread across all these leaves is the potential for it to be a stressful time in a team member’s life. What I like most is that I get an opportunity to relieve some of the stress by providing job-reinstatement protection and supplemental pay during the leave. In my opinion, I am making a difference, and that is what I enjoy most.”

What were some of the challenges you experienced in the transition to a civilian role?

“My biggest challenge was understanding the degree of control I had in the military versus what we have in the private sector. In the military, if the job isn’t done, you stay as long as it takes to get it done, and you actually have a lot of latitude for certain decisions. In corporate America, we’re in a different environment with labor laws and corporate cultures. In the military, we were taught to follow rules and standards. In civilian life, we do also, but some practices are different. Early on, I needed to learn the differences and understand boundaries. My leaders, peers and teammates were very helpful in my transition, and they still are when differences come up!”

What do you appreciate about Wells Fargo as an employer?

“Wells Fargo and my hiring manager saw that I have related experiences and education. My service in the Army was viewed as an asset — and not for an entry-level role, which I think is the most impressive part. I was hired as a manager of 13 team members and additional managed resources, for a total of 22 people in multiple locations. I was blown away by how the company treated me. A lot of companies say they hire vets, but they often don’t at the manager level. This job and Wells Fargo mean a lot to me and my family.”

What are some of the other benefits of working here?

“I love that I’m called a team member. In the military, we used the word ‘team’ constantly. That was an instant connection for me. We’re not called employees or subordinates here for a good reason. We’re a team, and that makes us all feel a part of something bigger than ourselves. The Veterans’ Team Member Network has been a great resource for me, as well as the Black/African American Connection. They were valuable steps in my transition here. I also love the team member discounts on LifeMart at LifeCare.com. The hotel and other discounts are great! And I would like to explore the tuition reimbursement benefit for my Ph.D. I cannot stress the value of education enough. And I appreciate that Wells Fargo invests in it for the team.”

What advice do you have for other veterans who work here?

“Take on new tasks to actually become uncomfortable so you can become better at what you do. Then, focus on your professional development and set goals. Make a personal inventory and use the tuition reimbursement benefit, career development opportunities, and any other resources you find useful, like the team member networks. And be sure to have an open mind when you initially make your transition to civilian life. You might not get the job you want at that time, but it can all build on what you already have in your background. Don’t have tunnel vision about what you did in the military, especially your rank. Just tell your career story well to help people see the connections in your strengths and their needs.”

What is your advice for other hiring managers?

“The one point that I would stress is, when hiring from the military, use a ‘total person’ approach. Do not just look at what someone’s job was in the military. Carefully consider candidates’ soft skills and ability to adapt to change. Keep an open mind and look for connections.”