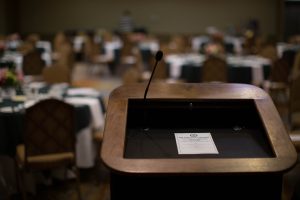 Members of the Association of Military Banks of America:

As required by the By-Laws of the Association of Military Banks of America (AMBA), the AMBA General Membership meeting will take place on August 29, 2016 at the Salamander Resort, Middleburg, Virginia.  The meeting will include updates on important military banking and AMBA organizational issues.

The membership will also elect five Directors for three-year terms and the Chairman Elect and Vice Chairman for two-year terms: